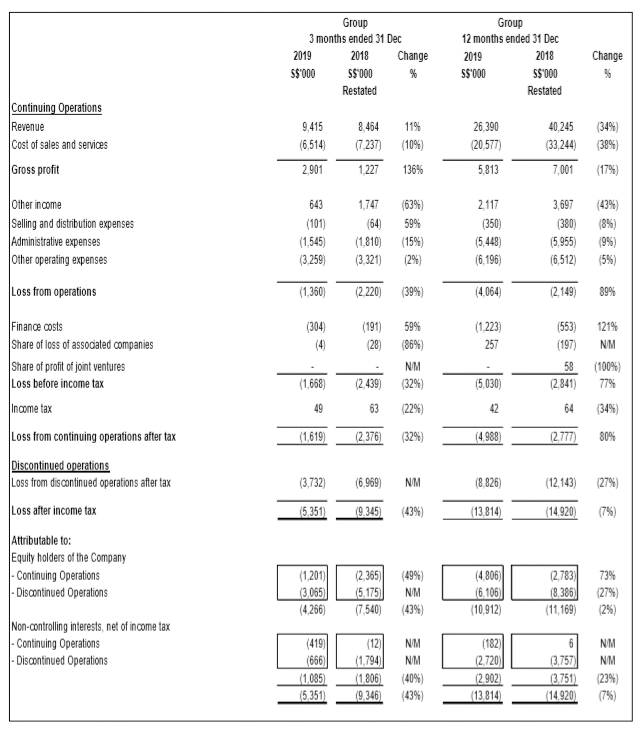 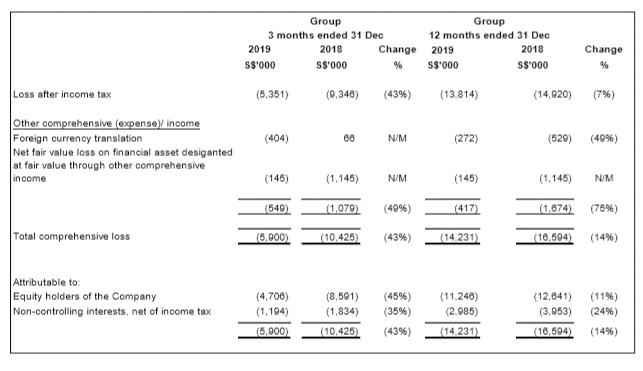 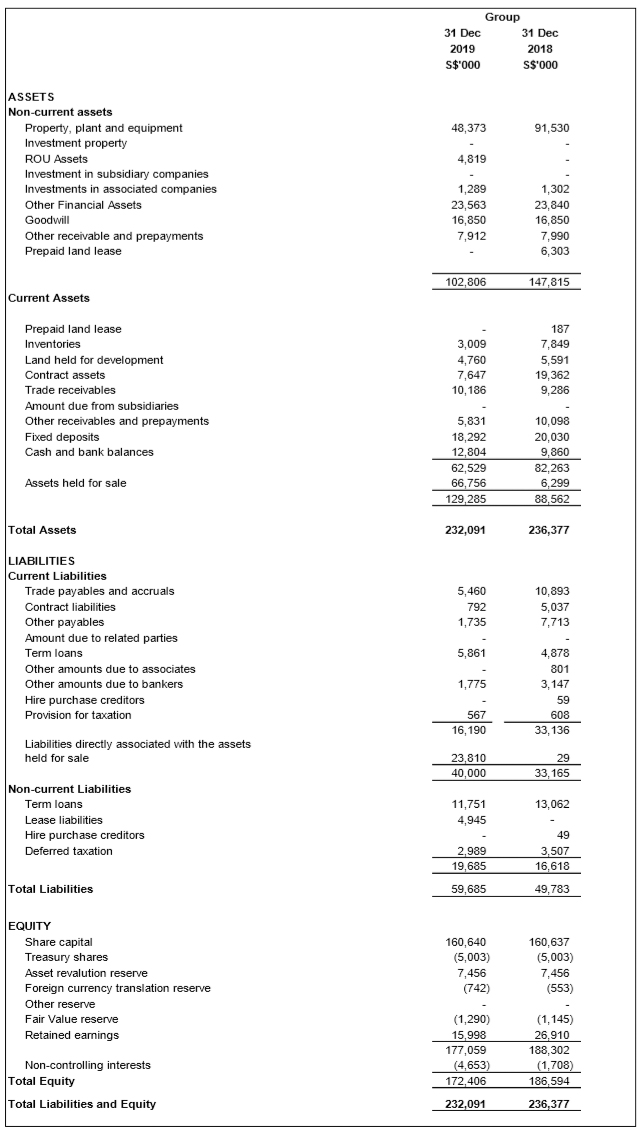 The Group's revenue improved by 11% to S$9.4 million in 4Q19, compared with S$8.5 million in the corresponding period last year. This was mainly due to increase in project revenue of E&C segment and CP segment in 4Q19.

For FY19, revenue declined by 34% to S$26.4 million. This was mainly due to lower contracts secured in E&C segment and Solar segment for the first half of the year but offset by some improvement in CP segment.

For 4Q19, the Group recorded a gross profit of S$2.9 million against a profit of S$1.2 million for the corresponding period last year. The increase came from the steel engineering business and CP business with the increase in business volume in Q419.

CP segment's 4Q19 gross profit climbed to S$1.5 million from S$0.9 million in 4Q18 and increased to S$4.0 million in FY19 from S$3.7 million in FY18 on the back of more CP services delivered by the plant operations and improvement from the site operations throughout 2019. The increased orders improve utilization of the factory capacity and equipment resulting a better gross margin of 26%.

Gross profit for E&C segment improved from a profit of S$0.2 in 4Q18 to a profit of S$1.1 million in 4Q19. This is driven by several high value projects commenced in Q419 which generated better margin as compared to the previous period.

However, gross profit for E&C segment fell to S$1.5 million against S$2.1 million in FY18 as there was no significant project in first half of the year from steel engineering businesses.

For 4Q19, improvement in gross profit margin driven by new jobs secured in FY2019 with higher margin and contributions from diversification into inverter distribution business. FY19 registered a gross profit of S$86,000 against that of S$0.9 million in the previous year.

Other income decreased by 63% year-on-year from S$1.7 million in 4Q18 to S$0.6 million in 4Q19 mainly due to the absence of a one off write-back of provision of S$1.2 million for the two years profit warranty unmet by the vendors in the acquisition of 60% of TLC Modular Construction business in 2016 in 4Q18. For the same reason above, Other income decreased by 43% from S$3.7 million in FY18 to S$2.1 million in FY19 and coupled with lower income from supply of labor from the E&C segment and lower interest income earned due to lower surplus cash placed in fixed deposits.

Total OPEX decreased year-on-year from S$5.1 million in 4Q18 to S$4.9 million in 4Q18 from lower administrative expenses largely due to the revision of key management costs in FY19.

Total OPEX decreased from S$12.8 million in FY18 to S$12.0 million in FY19 for the same reason above for administrative expenses and also without one off impairment charge of S$1.6 million for the value of land acquired in the Gold Coast for development in the previous year.

Other operating expenses in 4Q19 and 4Q18 remained unchanged at S$3.2 million. Other operating expenses decreased by 5% in FY19 mainly due to absence of one off impairment charge of S$1.6 million for the value of land acquired in the Gold Coast for development but offset by increased foreign exchange loss and provision for doubtful debts in E&C segments.

Finance costs were higher at S$0.3 million in 4Q19 and S$1.2 million in FY19 largely due to higher bank borrowings for re-development of the Hetat factory and office building of the E&C segment.

For 4Q19 and FY19, share of profit from associate companies was S$257,000 against the loss of S$197,000 reported in FY18. The improvement was mainly due to the contribution from associated company Yokomori's improved result.

Non-current assets decreased mainly due to reclassification of S$39 million to Asset held for sales in current year for assets of TLC and Solar development but offset with S$4.8 mil Right of use asset recognized in this year.

Decrease in value of Associate companies from capital reduction by S$270,000 from the Heron Bay project but offset with share of result of Yokomori with the equivalent amount. The decrease in financial assets of S$278,000 due to fair value adjustment of Energy Drilling and capital reduction of EVIA Korean Fund.

Non-current liabilities increased from S$16.6 million to S$19.7 million mainly due to recognition of lease liabilities of $4.9 million in accordance with FRS116 but offset with repayment of term loan of S$1.3 million.

During FY19, the Group recorded a net cash inflow of S$1.2 million.

S$3.6 million was collected to fund the operating activities with the change in working capital of S$4.9 million and the collection was mainly come from Solar development.

Net cash used in investing activities amounted to S$1.3 million in FY19 mainly due to the capital expenditures for the E&C segment offset partially by collection from Heron Bay Project, EVIA Korean fund and proceed from disposal of motor vehicle.

Net cash used in financing activities in FY19 was mainly for repayment of term loan and trust receipts of S$1.1 million.

After taking into account the above net cash outflows and net foreign currency translation adjustments, the Group's cash and cash equivalents as at 31 December 2019 stood at a healthy sum of S$31.1 million.

As guided in the 2018 Annual Report, 2019 is expected to be challenging for SHS as it embarks to regroup and right fit the business strategies against the resources and competencies of the Group especially for the E&C and the Solar Energy segments.

For the E&C segment, though the steel engineering business was facing low business volumes for earlier part of the year 2019, it witnessed some picking up in business activities towards the end of 2019. We remain optimistic on our steel engineering business for the next 12 months as we are likely to garner more order books. As for the modular construction business segment comprising TLC Group, differences between the Company and stakeholders of TLC Group over management thereof, coupled with other management issues led to substantial losses. Nevertheless, we are working towards a resolution including divestment is a possible option.

For the Solar Energy segment, amidst the competitive environment, the low business volumes for its roof-top solar projects in the current quarter is expected to see some improvements in next 12 months with more orders expected from overseas barring unforeseen circumstances. For our Bangladesh solar project, as per our announcement, we have obtained further extension from the relevant government body to complete the project until 30 June 2020.

For the CP segment, business volumes are also expected to pick up in the next 12 months as we are receiving more work orders from major shipyards in the marine and offshore sector. At the same time, it will continue its cost rationalisation exercise and enhance productivity to maintain an appropriate and efficient cost structure while it focuses on diversifying its customer base.